In between sound check and his live performance in Berlin, Portland-based musician Trevor Oswalt speaks about sound, silence, society – and his new East Forest album Held.

Listen here for a 3:47 audio interview with East Forest

It is cold and already getting dark outside when I arrive at Glashaus, a former industrial hall in Berlin’s district Alt-Treptow. Inside I find the artist at his keyboard, completing the sound check for his East Forest concert tonight. Trevor Oswalt shows no sign of haste. He is calm and completely absorbed. Floating from moment to moment – a characteristic he maintains throughout the evening and one that he carries straight into his music.

Later, as we sit by the glass facade watching the Spree flowing past us and the city lights of the opposite river bank reflecting on the dark water, Trevor begins by saying: “It is in nature, the sounds of wilderness and silence, that I find my inspiration.” In nature, he explains, he can find silence and with silence the power of sound emerges.

For the musician, it all starts with sound. “I am always listening. I connect to the world through sound more than visually. That is just how I walk through life.” Trevor’s fascination with sound is not so much about hearing but about feeling. How, I ask, does he define sound? He laughs and looks out on the water before saying: “Sound, we know, is a pressure wave. I like to think of it as a physical thing that touches people and forms an emotional response. …and that is what I am trying to capture: the feeling through the sound.”

As if taking a photograph to capture a fleeting moment, the artist captures sounds of the natural world with field recordings. In his studio, he then digitally merges the field recordings with instruments and vocals. By playing different instruments around the field recordings, the musician echoes what he refers to as “the musicality of the recorded sound”. This is how East Forest forms sounds into music so that music can form an emotion in us.

East Forest hardly uses any lyrics. His music does not speak through words. “Lyrics define,” says the musician, “but sound has this ability to be multi-dimensional and combine different emotions. And I want just the feeling. I want to transport a feeling in between happy and sad, something that transcends time and space. … I want to create an emotional experience that allows you to slow down and to reconnect to an inner space.”

The notion of ‘space’ pervades East Forest’s latest record Held. In contrast to his previous 11 releases, this record follows a minimalist approach and mainly relies on the acoustic sound of a piano. “I wanted to create a record that had a lot of space so that it could say more through less. There is less notes, less going on, and more time to hear yourself.” Floating from song, to song, the piano keys on his new release Held seem to offer to take one another by the hand and to quietly tiptoe together through a bright, open space of warmth, comfort and ease.

“Music, to me, is a tool to tune in with ourselves,” says Trevor as he reflects on the fast-paced rhythm of our digitalized world. Change is a constant part of life. With change there comes collapse as well as the chance to give rise to something new. “But we need that other side, too,” he adds and explains “especially now, as we are going through a phase of profound political and social transition, we sometimes need to be reminded of that safe space within ourselves.”

“It’s all about quieting down so we can listen to ourselves and hear the truth. There is so much we already know. We just need to listen. Sometimes it takes time to slow down and uncover what is wanting to emerge. And my music wants to entice people to go to that inner space and to reconcile with the heart center. I believe it is this invitation that is needed more in this world.”

Meanwhile the Glashaus is filling up and the concrete floor of the former industrial hall is now covered with yoga mats. Lululemon hosts tonight’s event ‘OM the Beat’ and brings together yoga teacher Kai Hill with the musician East Forest. For the next two hours the audience will flow through East Forest’s sound waves and follow his invitation. What is it, I ask, that attracts tonight’s audience of about 300 yogis to your music? “We are ultimately looking for the same thing – silence and stillness,” he says. Playing with opposites, it seems, is what Trevor does a lot. Like reflecting nature’s sound by digitally echoing it, exploring a feeling that lies in between happy and sad, saying less so we can hear more, or creating sound and movement to experience inner silence and stillness.

Shortly before the artist leaves to his keyboard on the stage, he adds “We’re all participating. There is something for you to do here too. It is not just about us doing something to you. This is a group effort.” 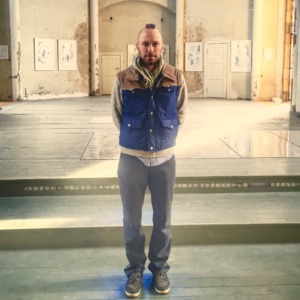 East Forest is the music project of the Portland-based artist Trevor Oswalt.

Find out more about tour dates and the latest record Held: http://eastforest.org

Catherine Khazarian is a writer and a yoga teacher